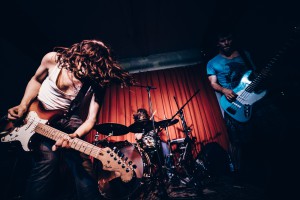 Founded in 2008, the Austrian psych/prog trio Mother’s Cake are set to unleash their third studio album, ‘No Rhyme No Reason’, in late January. The first to receive a dedicated UK release, those new to the band will be blown away by its many qualities. Songs such as first single ‘The Killer’, ‘The Sun’ and album opener ‘No Rhyme Or Reason’ create an immediate impact via an explosive alliance of psych, indie and blues rock (in no small part due to the voice of frontman Yves Krismer), while lengthier sonic excursions such as ‘Streetja Man’, ‘Enemy’ and ‘H8’ delve deeper with elements of psychedelic, progressive and space rock mixed into compelling sound palettes.

Mother’s Cake have also developed into a phenomenal live prospect. Extensive touring as a headline act in Austria, Germany and Switzerland, coupled with support slots further afield with the likes of AC/DC, Iggy Pop, Deftones, Wolfmother, Anathema, Pentagram and Omar Rodriguez Lopez Group, has left many attesting to the raw, pure energy transmitted by the band that has affected audiences on a primal and collective level.

Mother’s Cake have released two previous studio albums : ‘Creation’s Finest’ (2012) and ‘Love The Filth’ (2015), as well as a 2014 live album entitled ‘Off The Beaten Track’. Drawing comparisons to the likes of Mars Volta, Jane’s Addiction and Led Zeppelin, these records set the scene for what is now their best work to date.

‘No Rhyme No Reason’ will be released on 27th January 2017 via Membran.